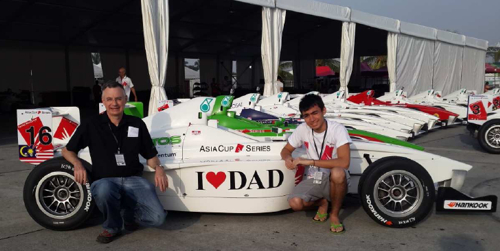 Malaysian racing car driver Daniel Woodroof made his single-seater debut this weekend in a Formula BMW car and gave his father a special Father’s Day gift on Sunday, 16th June 2013.

Taking part in the first round of the new AsiaCup single-seater racing car series organised by Meritus.GP at Sepang, Daniel won the final race of this event on Sunday, Father’s Day. The AsiaCup Series is designed to provide the first step in a driver’s career development path in single-seater cars and to allow them to gain the experience required to upgrade to Formula 1. It is a very competitive series with very experienced drivers from around the globe.
In the final race of the weekend, starting from 7th on the grid of 19, Daniel worked his way up the field during the ten lap race at Sepang International Circuit, Malaysia. The event was held as a support race for the Super GT weekend.
Lacking sponsorship, apart from that from his father, Daniel placed ‘I Love Dad’ decals on his car especially for Father’s Day and as a surprise for him.

His father was there to watch Daniel win. “It was a wonderful and thoughtful Father’s Day gift especially as this was Daniel’s first competitive single-seater formula car race – but his win was a testimony to his race-craft which he has gained over many years of karting,” said his father, Peter Woodroof.
Daniel, now aged 17, has been karting competitively for five years in Malaysia, Indonesia, Macau, the Philippines, Portugal and Italy. Although he still races in karts, the AsiaCup Series is giving him an opportunity to make the next step towards his dream of being an F1 driver. And this weekend he proved he has the ability.